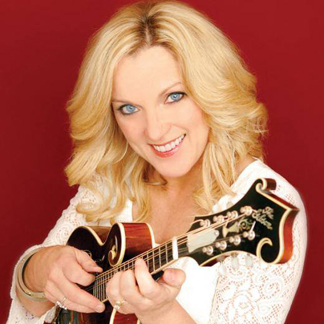 Vincent’s musical career began when she was a child in her family’s band The Sally Mountain Show, and has spanned more than four decades. Vincent first achieved success in the bluegrass genre in the 1970s and ’80s, earning the respect of her mostly male peers for her mastery of the progressive chord structures and multi-range, fast paced vocals intrinsic to bluegrass music. Vincent is an in-demand guest vocalist for other Bluegrass and Country music performers, appearing on recordings by Dolly Parton, Alan Jackson, Tanya Tucker, Joe Diffie and other notables.

She is the oldest of three children, and the only daughter of Johnny and Carolyn Vincent. Her brother Darrin is a member of the Grammy-nominated bluegrass group Dailey & Vincent.  A fifth-generation musician, Rhonda’s musical career started when at age five, she sang gospel songs with her family’s band, which was later known as the “Sally Mountain Show.”  Her father bought her a snare drum for her sixth birthday. At age eight, Vincent started playing mandolin. She soon excelled and began guitar lessons at ten years old. She later added fiddle to her list of instruments. In an interview with Ingrams magazine she said, “Dad used to pick me up after school, and Grandpa would come over and we played until after dinner almost every night. There wasn’t a lot going on in Greentop, but it was always hopping at the Vincent house.

About Dick and Danna

OUR BUCKET LIST: 1950 First kid in the area with a portable radio on my bike when I was in grade school........... 1951 Built a 5 watt radio transmitter when I was in high school and went on the radio from home. Not the most legal thing to do. Built a PA system from scratch also........... 1951-1954 Learned to play Steel Guitar. Played many shows of country music on 6 different radio stations with different groups in Western Pennsylvania........... 1954 Married Danna Lewis at when she was 15 years old........... 1960 Got into Citizen Band Radio. Danna and I were two of the original founders of CB Rangers CB club in Butler. We published a call book of all of the CBers in the Tri-State area............ 1969 Danna and I were two of the original founders of the Tri-State Country Music Association. I wrote a column for their newspaper every month........... 1960 We went to Nashville. Met Ralph Emery of WSM radio and Archie Campbell, a Hee Haw TV Entertainer. Had coffee with them at Linbaugh’s Restaurant in Nashville. Archie bought the coffee........... 1965 We developed a successful network marketing business. In later years developed a few others. Greatest training on attitudes and success........... 1968 Had a Built an outdoor stage. Had a country music jam session on our lawn at home with around 500 musicians and their family from 5 different states........... 1969 Played music on the staff band of the WWVA Jamboree and backed up all of the entertainers in front of thousands of people for 4 months. WWVA was second largest country music show at that time next to WSM Grand Old Opry........... 1984 Danna started her own typesetting business in her home. Danna Vernon Graphics had customers in 3 counties. Very successful. She taught herself how to run the typesetter machine. It was a photo typesetter. She also did layout work for printers........... 1988 I taught the secretaries at Butler hospital how to use word processing and computers, but I never had any schooling or education on it. I also did some computer programming. Before this I ran the printing operation at the hospital........... 1989 I quit a good computer job and Danna and I bought a printing franchise, Minuteman Press in Butler PA. Operated it for 5 years............ 1994 We bought a motor home. went to Florida. Spent 9 years going to Florida for 6 months every year and back to Pennsylvania for 6 months............ 1995 We played music with “Spur of the Moment” band in Florida........... 2001 Never knew my dad. Met him in 2001 and Danna and I spent a wonderful 5 years together before he passed away. Went on a wonderful 2 weeks tour of Europe (5 countries) with him. He lived in Bradenton Florida........... 2002 Danna started singing and ended up running the Suncoast Jamboree in Florida, She had her own band and scheduled everything. She sang and emcee’d the show. Played many of the RV parks in the area........... 2004 Started a recording studio in Pa and FL. Danna recorded numerous CD’s........... 2007 Since I was a little kid, I have always wanted to wear the spots off a deck of cards. I finally accomplished it this year. Threw the deck away........... 2010 We started and played in various Gospel Music Groups. Country Transition, Good News Country Gospel. Played churches all over Western Pennsylvania........... 2010 We played music on television shows on WHCU-TV Kittanning........... 2010-2014 Danna and I did a 30 minute interview talk show, Danna’s Radio Diner, on WTYM & WAVL radio. Over 30,000 hits from over 100 countries on our website as of June 2017. Still get many hits every day........... 2010 Danna and I were on TV participating in Family Life TV WHKU helping their Christmas Auction on television........... 2011 Danna and I both read our first commercial to be broadcast on WTYM radio. Also I wrote a radio promo and a short radio script........... 2012 Operated a TV camera on a live TV show on WKHU-TV........... 2013 Produced an hour TV show – Armstrong Trails on WKHU-TV Kittanning, PA. Produced a monthly live country music dinner show with various bands at WTYM radio........... 2014 We went on a country music cruise and interviewed 12 top county music TV stars for our radio show........... 2014 Rode for an hour in the cab beside the engineer of a locomotive on Kiski Jct. railroad. Broadcast it on one of our radio shows........... 2014 Played Steel for Nashvile recording star Teea Goans when they came to Kittanning on WKHU-TH and WTYM Radio. Also in 2013 backed up Joann Cash (Johnny Cash sister)........... 2015 Started Danna’s Internet Café, an internet radio show. Also shows were run on WXED-FM 107.3 and WFSN-FM 96.7. for a year and a half........... 2016 I bought a Uke Bass and learned to play it. Played a jam session a week later. Sounds like a big upright bass.
View all posts by Dick and Danna →
This entry was posted in Danna's Radio Diner Archive and tagged Bluegrass Music, Country Music, Country's Family Reunion, entertainment, fiddle, Larry's Country Diner, mandolin, Queen of Bluegrass, Sally Mountain, The Rage. Bookmark the permalink.